Sleep Paralysis is a transient and generalized inability to move and speak that occurs during the transitional period between sleep and wakefulness.

Episodes can vary in duration from one to several minutes and are usually extremely distressing for the individual, especially when accompanied by hypnagogic or hypnopompic hallucinations.

Many vivid descriptions of Sleep Paralysis can be found in the literature of the 19th century (in Maupassant's Le Horla and in Melville's Moby Dick, for example) and of the early 20th. The following excerpt is from F. Scott Fitzgerald's The Beautiful and the Damned: "...I lay there, frozen with most awful fears, not daring to drag away my hand; yet ever thinking that I could but stir it one single inch, the horrid spell would be broken" (Fitzgerald, 1922).

Interest in the phenomenon at the time extended beyond the literary sphere, as evidenced by Binns' clinical description of Sleep Paralysis in 1842, one of the earliest on record. The term Sleep Paralysis, however, was introduced only eighty-five years later, in 1928, by Wilson to describe attacks of powerlessness that can occur upon awakening. Two years earlier, in 1926, Adie linked Sleep Paralysis to narcolepsy, an association that persists to this day. 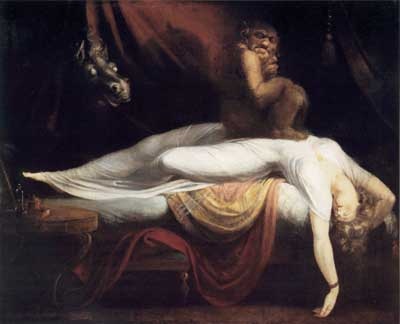 Before our study, it was estimated that Sleep Paralysis occurred in 30% to 50% of narcoleptic patients (Broughton, 1990; Yoss and Daly, 1967). The prevalence of isolated Sleep Paralysis (i.e., not related to other medical or psychiatric disorders) in the general population was less documented:

A representative sample of the non-institutionalized general population of Germany and Italy aged 15 years or over (N=8,085) was surveyed by telephone using the Sleep-EVAL questionnaire and the Sleep Questionnaire of Alertness and Wakefulness.

The numerous case reports in the literature of self-injuries, death or murders during episodes of sleepwalking attest to the potentially serious consequences of this sleep problem.

Sleep Paralysis is frequent in the general population, but less than previously reported.

The disorder is often associated with a mental disorder. Users of anxiolytic medication were nearly 5 times as likely to report Sleep Paralysis, even after possible effects of mental and sleep disorders were controlled for. The association between Sleep Paralysis and hypnagogic and hypnopompic hallucinations underlines their common etiology.

Sleep drunkenness, or confusional arousal, is a sleep disorder characterized by periods of mental confusion occurring upon wakening at night or in the morning

The violent behavior during sleep can be directed to self or individuals, or objects or property, but is always unintentional

Epidemiological data on the incidence of nightmares in adults or in subjects with psychological difficulties is scarce, yet this information would be of great interest