Although insomnia complaints are reported by nearly one third of the general population, the diagnosis of insomnia is only made in 6-15%. Similarly, excessive daytime sleepiness is reported by approximately one in five people but only 2% of the general population are diagnosed with hypersomnia, narcolepsy, or behaviorally induced insufficient sleep syndrome. In the vast majority of individuals, sleep disturbances are caused by or associated with various medical or neurological diseases, psychiatric disorders, or environmental factors. Therefore, it is imperative to diagnose these comorbid conditions prior to planning appropriate treatment.

Sleep disturbances encompass a broad range of phenomena, such as insomnia, hypersomnia, sleep apnea, and restless legs syndrome (RLS). The latest edition of the International Classification of Sleep Disorders describes criteria for the diagnosis of >100 sleep disorders, divided into eight categories [1]:

Most sleep disorders are accompanied by either insomnia, complaints of excessive daytime sleepiness (EDS), or both.

Insomnia symptoms are present in approximately 30% of the general population.

Therefore, it can be estimated that approximately 75 million people in the US and 150 million in Europe are affected by insomnia.

WHAT MAY CAUSE INSOMNIA?

Insomnia has many different causes of insomnia and, according to the origin of the condition, insomnia may be divided into three main categories (Fig. 1):

Periodic limb movement disorders (PLMD), RLS, or both conditions are diagnosed in approximately 15% of individuals who present with insomnia complaints [9, 10, 11, 12].

Poor sleep hygiene or environmental factors are responsible for approximately 10% of insomnia complaints. 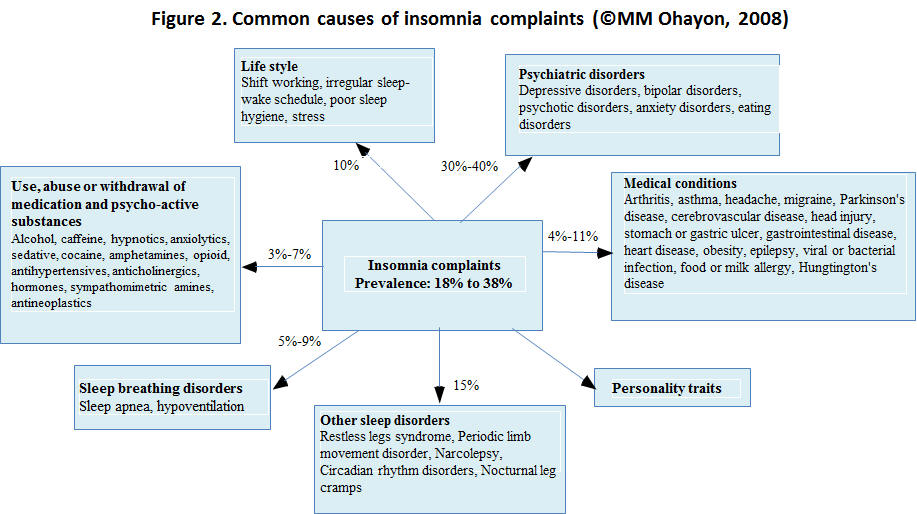 Epidemiological studies have consistently reported that:

In the general population, people with symptoms of insomnia have consistently been found to perceive their health to be poorer than the rest of the population [5,17-22] and ³50% do have recurrent, persistent, or multiple health problems [14,23].

The most frequently reported associations are with:

Several studies have attempted to determine whether insomnia can be responsible for cardiovascular accidents; however, the results have been inconclusive (Fig. 3).

One retrospective study found that insomnia was significantly predictive of myocardial infarction [31] and a prospective study reported that the relative risk (RR) of an individual with insomnia developing a cardiovascular accident was 3.1 [29].

DEVELOPMENT OF A MENTAL DISORDER

Two studies examining the time sequence of the appearance of insomnia symptoms in relation to that of mood and anxiety disorders reported that:

Individuals who sleep poorly ³3 nights per week, are dissatisfied with their sleep, do not feel rested upon awakening, and have hyperarousal in bed, are the most likely to experience repercussions in terms of their daytime functioning [4, 8].

In the general population, road accidents are experienced 2-3 times more frequently by drivers who are dissatisfied with their sleep, than those who report sleep satisfaction [8,18].

Such accidents are also more commonly experienced by those with short sleep times (defined as <5 h less per night) [41,42].

In the elderly, insomnia is associated with an increased risk of hip fracture [43], and falls [44,45].

Furthermore, the RR for fatal occupational accidents in individuals who have difficulty in sleeping is 1.9 [46].

Contrary to insomnia, EDS (defined as a propensity for sleep during waking hours) is not a diagnosis. EDS can be a symptom or a consequence of a sleep disorder, physical illness, or mental disorder. However, EDS is a disabling symptom that adversely affects various areas of quality of life and is a good indicator of the presence of health problems.

Excessive sleepiness is nearly as prevalent as insomnia, affecting approximately 20% of the general population [47].

WHAT MAY CAUSE EDS?

Like insomnia, EDS can be comorbid with several disorders such as organic diseases, mental disorders, and sleep disorders, or can be related to the abuse of or dependency on psychoactive substances. EDS can also be induced by the lifestyle of individuals or can be without apparent cause (Fig. 1).

In the general population:

EDS is an essential criterion for the diagnosis of just three sleep disorders - behaviorally induced insufficient sleep syndrome, hypersomnia (idiopathic, recurrent, or post-traumatic), and narcolepsy. These conditions are diagnosed in >3% of the general population [65] (Fig. 4).

In epidemiological, cross-sectional studies, 12.4-30% of subjects with EDS have been shown to have a depressive disorder and 20-35% an anxiety disorder [48-51].

However, unlike insomnia, EDS has not been found to be associated with development of a mental disorder in longitudinal studies [35,36,52].

Studies have shown that the risk of experiencing EDS is 2-4 times greater for people with diabetes than non-diabetics in the general population [51]. Other studies have observed that 16-74% of individuals with Parkinson's disease report EDS [53-55] and that elderly people who complain of EDS are three times more likely to have Alzheimer's disease [56].

In sleep clinics, OSAS is the most commonly seen cause of EDS, with ³75% of patients reporting EDS being diagnosed with OSAS. It has been shown that up to 25% of individuals in the general population who report EDS have OSAS [48-50, 57].

Unlike insomnia symptoms, EDS is generally not gender-related [49].

Whether its prevalence increases or decreases with age is not clear, as both trends have been observed [65].

Some work schedules, especially shift work, have frequently been often linked with EDS. Although some individuals may tolerate the physical strains caused by shift work, they are not immune to the fatigue, mood swings, reduced performance, and decreased mental agility caused by it. These problems are mainly due to the desynchronization of the circadian rhythm, that is, when the normal sleep/wake rhythm, the normal circadian rapid eye movement (REM) sleep rhythm, and the rhythm of REM and non-REM sleep patterns are disrupted. As a consequence, several shift workers complain of excessive sleepiness during working hours and of insomnia during sleeping time. Two studies have reported that up to 30% of night or shift workers report excessive sleepiness at work [46,18].

Epidemiological studies have reported higher risks of EDS in individuals who use antidepressants, anxiolytics, hypnotics, antihistamines, or alcohol (OR 2-6.7) [4,48,50].

In a study involving 2346 Japanese American men aged between 71 and 93 years, Foley et al. found that men who reported EDS at baseline were twice as likely to be diagnosed with dementia 3 years later than those who did not suffer from daytime sleepiness [58].

Ohayon and Vechierrini performed another study involving 1026 subjects aged ³60 years and controlled for age, gender, level of physical activity, occupation, organic diseases, use of sleep or anxiety medication, sleep duration, and psychological well-being [59]. They found that subjects with EDS were twice as likely to have attention-concentration deficits, difficulties in orientation, and memory problems than those without EDS.

Some population-based studies have investigated the mortality risks associated with EDS.

Hays et al. assessed mortality risk in a sample of 3962 elderly individuals (³65 years) and defined EDS by the presence of naps during the daytime [60]. They found that individuals who reported napping most of the time had a mortality risk of 1.73.

In another study by Rockwood et al., a small increased mortality risk (1.89) from daytime sleepiness was found in their elderly sample [61]. However, this risk did not retain significance when the model was adjusted for age, depression, cognitive deficits, and illness.

Therefore, it is crucial to explore the possibility of comorbid conditions in patients who complain of sleep disturbances.

Dyssomnias are sleep disorders characterized by abnormalities in the quantity, quality or timing of sleep

This syndrome is characterized by an imperative need to sleep suddenly and for brief periods, recurring at more or less close intervals

Restless legs syndrome, initially reported by Ekbom (1944), is characterized by disagreeable leg sensations occurring most often at sleep onset that provoke an urge to move the legs